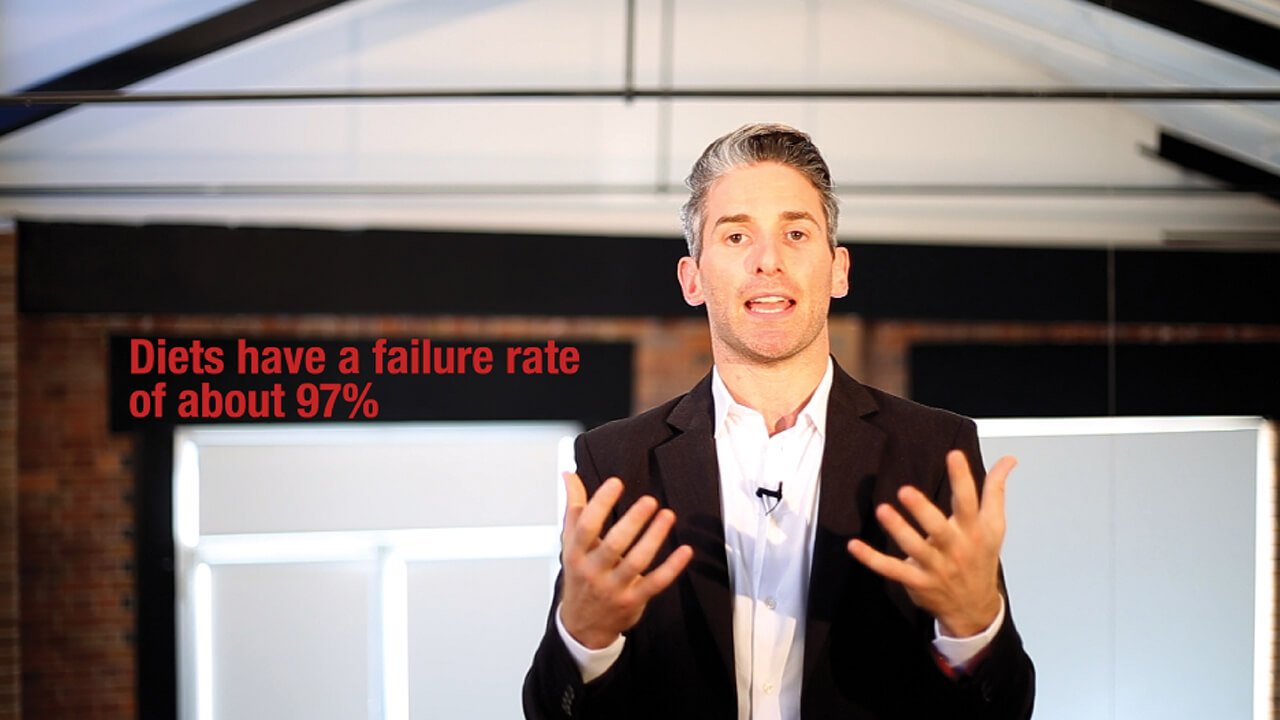 In this Thursday Therapy episode, Glenn Mackintosh shows you how to tell if your diet will work and how you can turn a potentially harmful diet into a healthy way of living!

Hey everyone. It’s Glenn Mackintosh, the weight psych, and welcome to Thursday Therapy. I’m really excited about Thursday Therapy. Since the last session, we’ve had over a hundred new subscribers and I’m really looking forward to helping you and anyone you know that these ideas can help in the future. Today we’ve got a really great question, it’s about the 5:2 diet and I’m looking forward to explaining to you my thoughts on that diet and a whole lot of diets in general because it’s very typical for people who have seen me and have done two, three, four or every diet Under the Sun and still haven’t found success that they want.

So, the question comes from Nikki who says; “What are your thoughts on the five and two diet and the “research” and “evidence” the Dr. Michael Mosley and Mimi Spencer use to support the diet in their book “The Fast Diet”?” Thanks for the question Nikki. What I’ve got to say about that particular diet is that I don’t really like it. I’ll tell you why, from a psychological point of view we know that any diets that a weight focused, any diets where you have to spend a lot of time between meals, any diets where you break foods up into good foods and bad foods and any diets that have a calorie restriction or an extreme calorie restriction set up physiological and psychological rebellious processes.

Now, to be honest, I haven’t read all of the 5:2 diet book but I don’t feel like I need to because I already know that the 5:2 diet promotes a big calorie restriction on certain days and I already know that it promotes not eating, so not listening to your natural signals of hunger and fullness for long periods of time. So, every time a new diet comes out I measure it against those four criteria and if it has only one of them then in my books it’s out. So, you might be thinking “Glenn that’s pretty much every diet” and I think that’s why we have literally hundreds of diets but people are struggling with their weight more and more. Diets are ineffective at very best, harmful at worst, probably harmful for most people. But if you’re looking to change your diet approach into a non-diet approach, so get rid of those harmful factors, there is hope and it’s somewhere in that non-dieting space that we’re going to explore a lot through all of the Thursday Therapy videos.

If you want to start we will provide a link to my blog called “The Diet Plus” which is where I show you how to turn a diet into a non-diet so you can get all of those helpful factors of eating well, without some of that nasty psychological stuff. So, to answer the question I don’t like the 5:2 diet for those reasons and you’re probably understanding that I don’t like a lot of diets for those reasons. Diets are marketed to us brilliantly, so they seem like the answer but if we look at the research of what actually happens to people when they do diets, you wouldn’t wish it on your worst enemy. The chances of success with a diet of losing significant amount of weight and keeping that off, with that diet based mentality, are about 3 percent. So, if you knew, say with me, you were going to get a three percent success rate, would you keep watching Thursday Therapy? The answer is if you’re smart probably not and if you’re interested in doing something with a ninety-seven percent failure rate then continue to do diets but if you’re interested in a new way of doing things, I’d encourage you to look into this non-dieting space.

Now, Nikki your question when you used research in inverted commas was a really good question because every diet you see has some new research they’re all scientifically based. You don’t say your program scientifically based, you’ve kind of failed diet marketing 101. So, every diet you can see out there is scientifically based. I’ll take a couple of things on that, if you’re looking at any diet and the scientific base is done on rats, or the scientific base is done on people who live thousands of years ago that don’t have to deal with everything that we have to deal with today, then we’re not really talking about “research”, we’re actually talking about theory. So, if you are seeing anything that’s scientifically based what you really want to ask yourself and what you really want to ask anyone who’s promoting these diets to you, is “Do you have long-term results in humans that show that this can effectively help me lose weight and keep it off.” If the answer is yes, then do it. If you can see that research do it and send it to me because I’d be really interested, because so far, we don’t have anything to show that just focusing on weight loss is going to get people sustained weight loss and the results that they want, that dieting based mentality fails time and time again.

A great example of this for me was I was chairing a session at the global weight management Congress and there was a person there who was speaking about paleo, and paleo was a weight loss strategy, and for me the first 15 minutes I’m looking and thinking; wow this is a really convincing argument and all of the theory made really good sense, and then there was a question from a doctor in the room about the research on humans and humans in this day and age rather than humans who lived in that sort of Palaeolithic time and that was where that researcher’s argument started to fall apart and I must say chairing that, it was interesting for me to see that in an academic environment, in a research-based environment, that theory didn’t come close to holding up. So, when you see evidence-based programs I want you to really think; “Have they done long term studies at two or more years in human beings that showed this can work with them?” and then if not, chances are it’s going to be like all of those other diets that were scientifically based but after the years of experience we know doesn’t work. Now, a quick caveat on my approach: My approach, at the moment, doesn’t have the research to back up what I do. My approach is an experiment. The underpinnings of my approach are evidence-based. So, I follow a weight inclusive or non-dieting approach. There’s research that shows that works better than a diet. I follow an interdisciplinary approach because there’s research to show that works better than working with one or two individual practitioners. I follow a combination of the more traditional psychological therapies and alternative therapies because there’s evidence to show that that actually works better than the more traditional therapies like the cognitive behaviour therapy and the behaviour therapy that are currently what most psychologists do solely. So, the tenets of my program are evidence-based but the actual program itself is not yet. I do an emotional freedom program with Peter Stapleton and we’ve started to do research on that. It’s the only research has ever been done on EFT for weight management and I’m currently collecting data and if anyone out there knows of any researchers that would be willing to look at and research my program, I’m very happy for that to happen. I’m actually talking with a couple of universities to try and get that off the ground now.

But I suppose my point is, that the evidence doesn’t exist for a program unless long-term studies have been done on people and if you’ve done five different diets in the past something like 5:2 or paleo or whatever the next big thing is with whatever its scientific claim is, is probably fitting into the theory rather than the research and needs more research for it to warrant your time your effort your energy and your money. So, thank you Nikki for a wonderful question. I hope that shed some light on something for you guys and also creates a positive type of confusion because I want you to know what doesn’t work and because I know that you’re invested in getting the results that you really want and finding the answer, that’s going to leave you open to looking two things that do work more in a non-dieting or an intuitive eating or a weight inclusive type of space.

So, thank you, I think this has probably been the longest Thursday Therapy. Please comment below and you know what, if you’ve got any questions, ask them. We’re only going to use your first name so unless you have a name like “India” no one’s going to know, it’s the most anonymous way that you can ask a question and I’ll answer it. I hear this all the time for my clients like; “Glenn I loved your great Thursday Therapy, Glenn that was such a good idea that last one” but I don’t have as many people questioning. I want more and more questions because the questions are fantastic. So, please if you have one, be brave and ask a question and as always please share this with your friends. I think there’s so much out there in that yucky dieting space that’s being shared around social media and I’d love for these evidence-based ideas that can really actually help people to get out there. So, thanks for listening to Thursday Therapy and I’ll see you in next session.