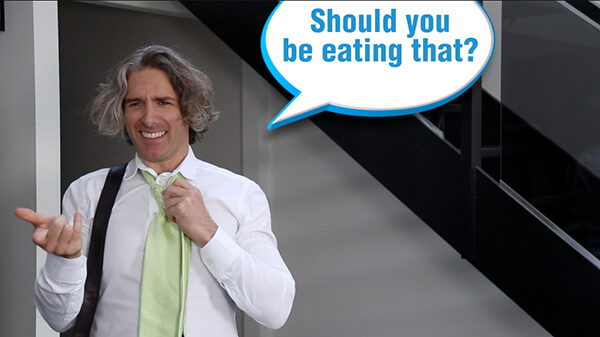 If you’ve been watching my videos for a while you probably know a bit about non-dieting (If you’re new I’d highly recommend checking out my past blogs and videos and getting informed!).  But if your family, friends, and health professionals don’t understand why you would take the focus off your weight (or even worse – are AGAINST you doing it) they can inadvertently make the journey that much more challenging.  In a weight-focused society, it can be hard enough to explain non-dieting, let alone gather support for it, so I’ve put together my 5 favourite tips for helping others understand the approach you are taking, and get on board with supporting you!

Welcome to Thursday therapy where I answer your question on the psychology of eating, movement, weight and body image, every two weeks. This is episode number 50.

Holy moly, who thought we would get here? This is really cool, we’ve got a really interesting topic for you today. Something else has been happening that’s really cool, is we’ve decided to take all of our Thursday therapies and give you what we call Thursday therapy snippets. So these are just little minute, to maximum three minutes, condensed versions of some of the best and most easily digestible parts of Thursday therapy. So I’m doing that on my Instagram and also on my Facebook, not the WMP Facebook. So we’ll provide some links to that, but let’s get to answering today’s Thursday therapy question which comes from Kelly.

“I am doing your 12 Month Transformation programme. How do I explain the non-dieting approach to family and friends? If they don’t understand it, then achieving my TMT goals will be that much more challenging. On a personal note, I want to be able to have the occasional ice-cream or biscuit and enjoy them without the shame and guilt of eating them in secret. When I eat secretly, I’m more likely to binge.”

This is great question Kelly, and it’s something that I talk about with my clients all the time. Because most of us, we grew up in a society that idealised thinness and at the same time stigmatised fatness. So it’s really hard for people to understand how you could do an approach that’s not focused on weight, especially if you’re a person that’s living in a larger body. So you’re likely to get friends and family members, and even a lot of medical health professionals try to steer you back towards a focus on weight. Which can kind of leave you at cross-purposes. So let me give you my few, favourite ideas on how you enlist support when you’re following this non-dieting approach.

I see your social influence is on a continuum between sabotaging your progress and supporting it. We really want to help people move further along that line. So a great way to start to do this is if the person isn’t convinced that this is the right approach for you, just ask them to be patient so you can take the time without the pressure to figure out whether this approach can work for you.

A great example of this is. I’ve been recently working with a client who’s had an endocrinologist. The endocrinologist wanted the person on a weight loss plan to improve their blood, and we were able to negotiate with the endocrinologist a six-month time period. Where we would see if non-dieting and just improvement of eating and exercise without focusing on weight loss would improve the blood. Now, the endo was open-minded enough that we could do that. The blood test results did improve, and so then she was happy for us to continue down this non-dieting path.

It’s likely that the person you’re talking doesn’t know much about non-dieting. If they think that you need to lose weight, then they’re probably worried that it’s going to do you more harm than good, or at least that it’s not going to work at all. Now, you’re going to want to help them understand that non-dieting actually gives you a better chance of being a healthier and a happier person, especially when it comes to the longterm. Now, the trick here is, if you’re talking with someone that you’ve known for a long time, you do run the risk of them seeing you through the lens of someone who has had several failed attempts at a lot of different things.

So sometimes, unfortunately, your word is not as credible. So to validate the non-dieting approach, sometimes it’s really useful to actually rather than having the conversation with the person, show them some information on non-dieting. I remember having some sessions with a client of mine, she was doing really well and her husband was an engineer. He said, “Oh, that psychologist, he is just telling you what you want to hear. Eat whatever you want, you’re fine as you are.” Then when she showed him a couple of my Thursday therapy videos, she said, “Halfway through, he kind of took a pause and he said, ‘I get it, this is about sustainability.'” From there, he was much more supportive of her sessions and of course she got better results.

So I’ll provide you with some links to some of my blogs. Of course, you’ve got all the Thursday Therapy videos, but I’ll also give you some links to some really great people part from me that can really help you explain the non-dieting approach to other people. A great way to help scientifically-minded people understanding the value of non-dieting is actually by showing them the research. I remember doing a workshop for a bunch of doctors, and the people organising it said, “Glenn, you technically have an hour to spend with these guys but you’ve probably got 45 minutes of their attention.”

When I got there it was a Friday afternoon, most of them had a wine in hand and I was set to talk about non-dieting. I thought, “These guys are going to smash me.” But it turned out, after two hours, we were talking about the research, we were pulling apart studies. They ended up having to kick us out of the room. So the main study that I often like to … I ask my clients to print it out and take it to their health professionals, I’m going to provide you with a link to that now. So if you’re talking with scientifically-minded friends or family, or especially health professionals who are trained that way, you can just take it to them and help them understand the scientific rigour of non-dieting.

Often would-be supported need to understand how them shifting their attitude will actually help you. Because that’s probably what they want to do, is help you. The best way to help them understand is to open up. So Kelly, who asked the question sort of said, “When I feel like I can’t eat that food in front of everyone else, I eat it in secret. When I eat it in secret, then I eat more.” So it doesn’t matter what the family’s intensions are, their intensions are probably good, the impact of their actions is actually making Kelly eat more. So Kelly, if you can take a deep breath and open up to authentically sharing that story in a way that those guys can understand, then you might turn some sabotage into some support.

I had a great session with a client just a couple of weeks ago, where she had a father who was very weight-focused and had actually found some pretty longterm success. He was one of the very few people who do find longterm success with kind of a restrictive diet. I was so proud of her because she was really brave, she took some deep breaths and very authentically honoured her voice and explained to her dad how the fat talk that he was sending her way was really upsetting her. So far, so good, he hasn’t said a word since.

So if you’re going to have this conversation, you’re obviously going to think about what time and place is appropriate. You might rehearse it because after all it’s an important conversation. If you don’t trust yourself, you can even write a letter. I’m going to give you a link to a great letter I found to a doctor, and if you search the internet, you’ll find dozens of these to give you a bit of food for thought.

Just like you want compassion from people around you, I want you to extend compassion to those people that you’re trying to help understand how to best support you. The reality is that we do live in a weight-focused society. I know with my clients, it’s hard for them to get non-dieting principles. So it’s going to be hard for those people around you to get it too. With any discussion, this is the most basic psychology but we often forget it. We all do better when we’re spoken to calmly, and kindly, and respectfully. We all listen better when we’re listened to, so make sure you leave some space for the other person to voice their concerns and really hear what they’re saying. If you have the conversation in this way, you’re very much more likely to get this win-win, the positive outcome that you both want.

Guys, thank you for being with me for another Thursday therapy. Number 50, the half century. This one has been a little bit different but this stuff is so important. Of course, its 100% your responsibility to take care of your own health, and fitness, and well-being, but we do know that the people around you can either take the wind out of your sails or pump it right up. So it’s also your responsibility to know yourself well enough, to know what approach is right for you, to have those sometimes difficult conversation, and to keep fine-tuning until you’ve got the right mix of support that’s best for you in the long-term.

So let’s make that your homework between now and next Thursday therapy. Of course, if you like this video, let us know, if you have any comments especially on your experience with doing this, we’d love to hear them. If you haven’t already, subscribe for all the Thursday Therapys to come.