How the heck do I get motivated? (Interview with Leanne Ward) 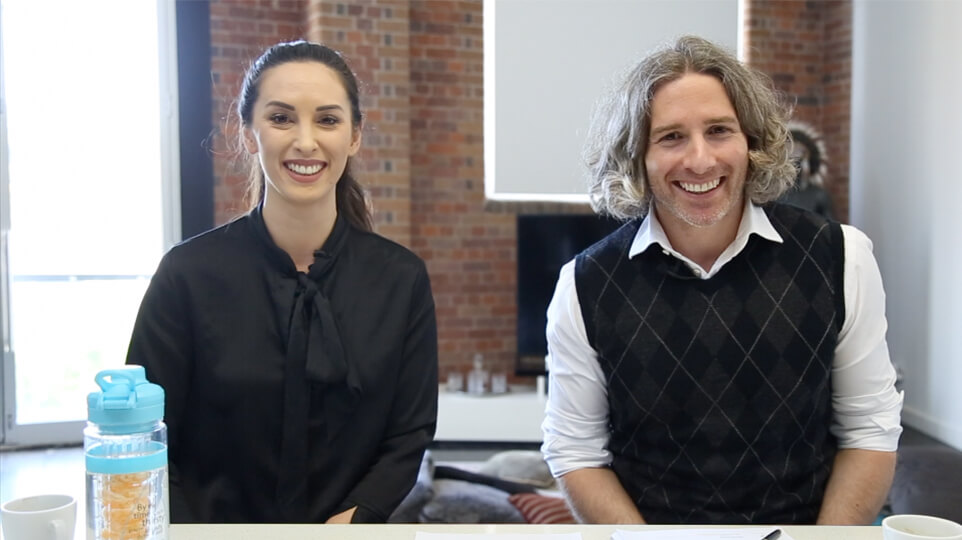 So many of us have trouble getting ourselves going, doing what we intend to, and achieving our goals.

In this powerful short interview The Fitness Dietitian Leanne Ward and I answer Serena’s question – “How the heck do I get motivated? ” discussing:

✔︎  What motivation is (and how to build it)
✔︎  The way I set goals for success (not sabotage!)
✔︎  How to turn airy-fairy dreams into crystal clear motivations
✔︎  The “sweet spot” time-frame for goals
✔︎  Why I’m not a fan of weight goals
✔︎  The realization both Leanne and I came to over our work with clients
✔︎  How motivation is like having a bath 😛
✔︎  Motivation comes from doing, not the other way ‘round.
✔︎  How Leanne and I deal with “blah” days (we do have them!)
✔︎  How to get motivation from other people
✔︎  The biggest motivator Leanne uses to motivate herself everyday.

Glenn:                     You are a good audience. This is something that I’m sure you get, and I get all of the time. It sounds like Serena, you’re kind of just having trouble getting things in motion, so let’s see if we can give you a few ideas that’ll get you on track.

It is an oldie, but a goodie. The best thing that you can do for your motivation is to set some goals.

Glenn:                     It has to be realistic and it has to be crystal clear, because the process of writing down goals turns it from like an airy-fairy daydream into something that you can see. It gives you visual.

Glenn:                     Because for a lot of people, and we don’t often talk about this, but you get a lot of motivation when you set goals, but it also comes with a lot of doubts and a lot of fears. And one of those big ones is that once you’ve set the goal, it just seems so overwhelming.

Glenn:                     So it’s exactly like you say. The first way is that we get over that is the goal has to be realistic. So when you set it, you should think, “Oh, this might stretch, but if I’m real with myself, I know I can do this.” It should actually feel really nice and light and positive. If it feels too much pressure, then it’s probably something you want to revise down. Doesn’t mean you can’t then set another one next year and go again.

Leanne:                   ‘Cause there’s no better motivation than actually meeting that goal and going (snaps finger). Kicking that one up rather than setting a goal that’s so huge that it sits on your bit of paper for the next five years because you never realistically gonna achieve it.

Glenn:                     That ain’t very motivational. And then you can, if you’ve broken it down into those quarters, you never forget where you want to go at the end. But you can just focus on what’s that next step. So you’ve just got that next, and that might be sort of … I like to set these goals for round about a year.

Leanne:                   And you may not have never even got there. But how motivating is actually being able to tick off every little step that you actually do.

Leanne:                   Awesome. And you can see progress that way as well. You can actually say, “I feel like I haven’t really got, come anywhere but look how far I’ve actually come from where I started.”

Glenn:                     You can set goals for your energy. So I saw Serena said I’m really tired. You can go on the internet and check out, there’s a scale that I like to use called the Vitality Scale and you can measure yourself and then say, okay, if I’m a two on the Vitality Scale … I can’t even remember what the numbers are, but say it goes from zero to ten. Okay, well next time I measure myself, my 25% might be I’ll be a three. Then a four so you can actually, objectively measure it.

Leanne:                   Yep. Or even a goal around tiredness. How much sleep are you getting? If your somewhat, Serena, if you’ve got kids and you only get maybe four or five hours sleep a night, you’re 25% could be six hours, 50% could be seven hours. If maybe breaking even down your goal in terms of not motivation, but in terms of what you wanna achieve and that’s going to be more the motivation to get you there. So break it down into little, small segments, and as Glenn said, make it health-related rather than weight-related or an exact number-related.

Glenn:                     Yeah. Absolutely. And you can really set it for anything. I do it with my clients and you can always find a way to get an objective number measure. Because it is important to have a number because I think you and I are not massive fans of the scales.

Glenn:                     But one of the upsides, if there is one, is that it is a clear measure. So what you wanna do when you’re setting non-weight goals is have the measure just as clear. So let me give you another example of this. Last year I realized I was working a bit too much and I’m not seeing my friends and family enough.

So then the last thing is, of course, this is really setting yourself up for success, but you’ve got to stay motivated.

Glenn:                     You gotta do it all the time. And it’s interesting you say great to do, because motivation to do things often comes of doing. So it’s that circular definition. Once you start to get out there and do it, you will feel more motivated and so I think it’s been a combination of the doing the actions of motivation. They actually get you more motivated, and then thinking the thoughts. Because I did my research in motivation. And it is one of these unstable kind of factors. It does go up and down that’s why sometimes, we were talking about it before, sometimes you’re like “I’m so pumped today.” And other times you’ve got the same goal and you’re like “Uh, I couldn’t be bothered.”

Leanne:                   And Glenn and I aren’t unicorns. Like we sometimes, I’ll just say to Glenn, I turned my alarm off yesterday. It’s 5:15. I was supposed to get up and exercise. I didn’t. I rolled back over in bed and I kept sleeping. So even we need additional motivation some days. We’re not these perfect unicorns that are just highly motivated all the time.

Leanne:                   And for me, one of the biggest motivators, and I do this every single day without fail whether I’m at work in my hospital dietician job, whether I’m at home doing all my social media stuff, or whether I just have a whole heap of chores to do for the day, I set to to-do lists. I mean they’re not for everybody, but just ticking things off a to-do list for me just gives me that little yes, I did it. I ticked a few things off.

Glenn:                     … at some stage you need to turn those broad, we call them outcome goals, like goals for the results that you want, we need to turn them into little process goals. So it’s like well, how do I actually get there? And often we miss that part, so a to-do list or little smart goals can be really, really good.

Leanne:                   Or even just a little calendar. I mean, your goal might just be to be healthier in general in the next year. And then if you broke that right down, you might just say I want to add vegetables to my dinner at least five days a week. And that’s something that’s pretty achievable. You might get a calendar and tick each day that you add extra vegetables to your dinner. And at the end of the month, imagine seeing all those little ticks on your calendar. That’s motivating enough to continue going with that. And it’s taking you every step closer to your goal.

Glenn:                     So it’s kind of like set a goal or a bunch of goals, give yourself some milestones so you can see that you’re achieving it as you go. We probably both think, maybe stay away from the weight-loss goals. Especially as they’re really dis-empowering or especially if you’ve don’t that quite a few times before.

Leanne:                   And tell other people as well. I think it really makes a goal really stick when you’re telling people. If you’re telling people at work, “Oh man, I’m really trying to eat more vegetables.” And you go to the cafeteria nearby. A ham and cheese sandwich. At least your colleague can be like, “Hey, why isn’t there lettuce or tomato on sandwich?” The minute that you tell people your goals, it makes it more tangible, like a-

Glenn:                     Like let’s have a walking buddy or a gym buddy. Or hey, you know what, if our routine is with your partner, we get home and we order the pizza and we have the ice cream. We sit there. Maybe we can do that a little bit differently. And then of course, plug for both of us, see your health professional.

Glenn:                     Because look, I think we’ve got a lot of obviously skills and knowledge and experience but I think, if we’re being honest, a big part of what we do is pumping up your tires and just keeping you regularly motivated as well.

Leanne:                   Exactly. We can’t be there for every single day, but just touching base with us and we can help you to refine your goals and that sort of thing. And say hold on that might not be as realistic. And perhaps we go this way instead. So if you’re someone who’s tried a few of these things before, perhaps linking with your local health professional, and we can help you set more realistic and achievable goals. And break them down. And that’s what’s gonna give you that constant motivation every day. Little things that you can tick off every single day. Take you closer and closer to your goals.