How to Stop Emotional Eating (Interview with Libby Babet) 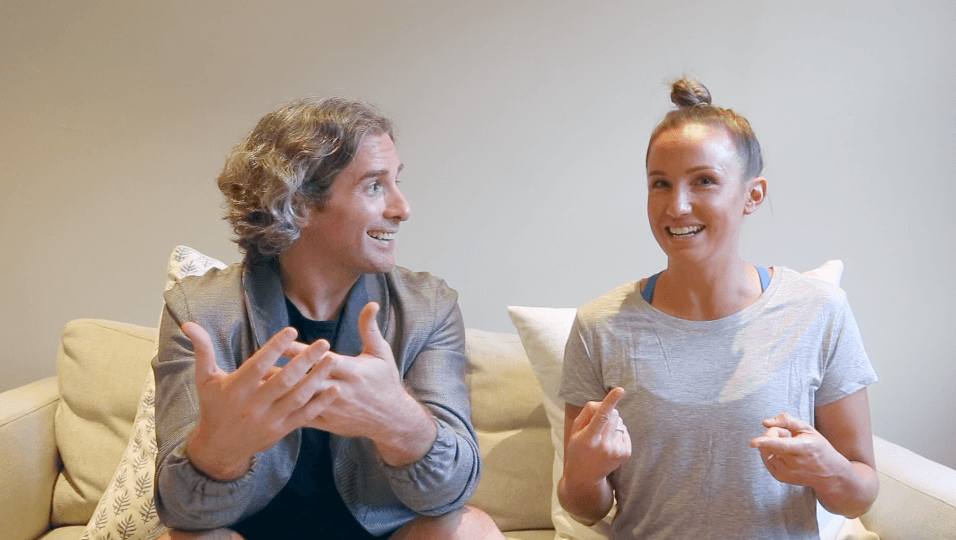 Emotional eating is impacts your headspace AND your waistline.  So what actually is emotional eating, why do you do it, and most importantly, HOW DO YOU STOP?

✔︎  What emotional eating IS (and how it differs from just loving food)!
✔︎  How emotional eating habits develop (it may not be what you think).
✔︎  Why Ben & Jerry’s is NOT your second boyfriend.
✔︎  The first step to freeing yourself from emotional eating.
✔︎  Libby’s #1 way to feel better without eating!
✔︎  How to shock yourself out of “Zombie Eating” and make better choices
✔︎  How to unlock “More Marvellous Methods to Manage Your Moods”
✔︎  Glenn’s favourite quick tip for if you feel like emotionally eating.
✔︎  How Lib & Glenn have “poo days” (and how we deal with them).

If you love this chat and feel like you need a helping hand to fully experience the benefits of freedom from emotional eating for yourself, we have a 6-week fully online program that will help you say goodbye to emotional eating forever, learn many more marvelous methods to manage moods, and feel a lot better as you let go of habits that were no good for your headspace (or your waistline)!

Find out more about Freedom from Emotional Eating

“I can’t help it, I’m an emotional eater.” All this kind of stuff, and-

Glenn:                     Yeah, so it’s if you’re feeling bad, soothing yourself with food. It’s not enjoying yourself, socialising, maybe eating a little bit too much. This is the stuff where you’re not feeling so good and you’re kinda using food to kind of medicate yourself, in a way.

Glenn:                     And emotional eating is a bit like that. Like, people often say to me, “Glenn, I’m a smart person. Why can’t I get on top of this?” And I think it’s quite understandable, because even though most people end up feeling worse after they emotionally eat, for that little period, you do feel better.

Glenn:                     Totally. Most people … I mean, we research it. Say, if you’re stressed, or you’re angry, or you’re lonely, the mood goes down while you eat and then comes back up after, but I say it’s like double dipping on a bad mood when you emotionally eat, because you feel bad. Say I feel stressed. Now I eat-

Glenn:                     Yep. And the other thing about emotional eating, why it is important to work on, is because, in psychologist language, it’s a maladaptive coping strategy, which means that it actually doesn’t help you solve the problems. You know, if you had a fight with a boyfriend, you go to Ben & Jerry’s, it’s probably not gonna make you feel … this is gonna go the whole way through. I’m running with this.

I’m leaning into this metaphor.

Glenn:                     And that’s what I say to people. There is no nutritional solution for an emotional problem, and that’s really the start of being free from emotional eating, is recognising that no matter what I’m feeling, whether I’m stressed, or sad, or tired, or lonely, or angry, the answer is not a nutritional answer.

So, I know that you have actually created, I guess, a method or a process for other dieticians, psychologists, trainers like me, to use to help people overcome emotional eating. What is that kind of strategy about?

Glenn:                     I developed a little model to help you kind of get what’s happening as it’s happening, because you’ll hear clients say this all the time. They’re like, “Okay, I plan to eat well, but then this happened. I had a big day at work,” for example, “and I just went into autopilot, zombie mode, just started eating everything and afterwards I kinda became like, ‘Oh my god.'”

And some people have little balloons. They don’t have much tolerance for unpleasant emotions. Some people have bigger balloons and they can deal with a lot of stuff, but everyone’s balloon has a limit, and at some stage it just gets too big, it’s too much, and you gotta let it out.

Glenn:                     Or the balloon will burst. So, you gotta let it out, and for a lot of us, we’ve been doing it since literally seconds after we were born, you start to emotionally eat, and we confuse that process of getting nutrition and getting emotional comfort, and as adults, we just figure out our own ways of doing this that we’ve done since kids.

Libby:                      Definitely. In fact, we’ve talked about this. Like, you know, I’m five months pregnant at the moment, and whilst I’ve … in the first kind of trimester, where I couldn’t exercise, I actually found it so much harder to manage my emotional state. You know, I’d get down, I’d be like, “There’s nothing I can do to make this better,” because going for a walk, or a workout, or whatever it is, is one of my things.

Glenn:                     Yep, so we wanna develop a whole series of let off valves, whether it be physical activity, or passive things like meditation, or learning to communicate with people. You know, get it off your chest.

Glenn:                     Yeah. There are a million different things that you can do, and I like for people to have a variety of strategies. Actually, I’ve got a little more marvellous methods to manage your moods sheet that, when you listen to this, you can brainstorm some of your own ideas, and you chuck it up … I’m just looking at Libby’s fridge.

Glenn:                     So there’s really kinda three parts to working with the balloon model. The first part is developing these more marvellous methods, then the second part is actually looking at those things that are feeding into the balloons, actually dealing with your life.

Glenn:                     Yep. So we get a lot of people doing our emotional eating programme, who come in to stop emotional eating, which is transformational enough in itself, but then they end up changing things with their relationships, their jobs, the way they feel about themselves. It’s really, really cool.

So, that’s the second part, but as you know, Lib, you’re a really positive person. Again, I’d bet money you don’t feel great all the time.

Glenn:                     So, even if you’re really good at managing your moods, and even if you really solve any of those things that are constantly feeding your balloon, you’re gonna have bad days, and if you don’t know how to make room for those unpleasant feelings … I won’t call ’em bad feelings, ’cause they’re normal.

If you don’t know how to make room for them, then when you feel bad you always go back to emotional eating.

Libby:                      Yeah. I think it’s interesting, isn’t it? Because I really think that sometimes you just need to have a day where you just don’t feel great, and you have to be like, “This is one of those days, and I’m just gonna get through it and refresh tomorrow.”

Glenn:                     So that’s … I was trying to think of, ’cause we call this emotional acceptance, or emotional expansion. Making room for feelings. ‘Cause, thank god, you don’t feel any feelings forever. Even if you’re really angry, it will go away at some stage without you having to do anything, and I’m thinking, “How do I put this into my balloon model?”

So, the things we do. I did some research into balloons.

Glenn:                     You don’t have to do anything frantically to make the balloon go down. If you can in a healthy way, that’s great. If you can deal with the feeling with a more marvellous method, or if you can solve the problem that’s causing the feeling, but sometimes when you can’t … because sometimes we feel bad for no reason.

Glenn:                     Yeah. It can be anything, and sometimes, you know, cyclical … it might be things that are sitting in your subconscious, so you don’t even realise. But, if the balloon gets too big, you don’t have to emotionally eat. You can just-

Libby:                      That’s good balloon research. So, if we had to give everyone at home watching now one quick tip, ’cause that’s really great for me to work with people, but then I’m thinking of the balloon model every time. So, what’s one quick tip for people at home to use to, when they feel like they wanna emotionally eat, to apply?

Glenn:                     Exactly. So, even if you’re … you know, sometimes you might not be able to identify that you’re feeling unpleasant feelings. If you check in, you might find some that you hadn’t recognised.

Glenn:                     If you struggle with that, some people just find it hard to … so, that exercise is just to stand there or sit there, take a couple of breaths and get in tune, see if you can label the feelings that are going on. If you’re a bit more concrete, a really cool task-

Glenn:                     No, if you don’t know, but you want a concrete exercise, do what we call … psychologists, we’re funny. We like to think of big words for everything. We call it free association writing, but all it is is you just get a pen, a pad, and you just write down whatever you want.

Glenn:                     And the beauty about that is knowing how you feel, and being attuned to your emotions, it starts to give you a starting point for how you can deal with them.

Libby:                      Yes. Totally, because acknowledging is often the first step. Going, “Okay, that’s what it is.” And if it is that I’m frustrated, maybe a bit of a workout is the answer, because that helps you to change your state, and then let go of that frustration. If it’s just a bit of sadness, maybe it is having a call with someone you love.

Libby:                      I know, and people have such a negative association with crying, but I think, for me, it’s like my balloon is full and that is a valve that will just allow me to let out all of those emotions and restart, which is cool.

Glenn:                     You know what, Lib? I think we’ve kind of wrapped it up, but I think the thing that I would say is, in reality, it’d be awesome if you watched this and everything just changed, but learning to deal with your emotions in new ways, it takes time.

Glenn:                     So, I would start by, if I could give any advice to people watching, is start by having a play. Don’t expect you’ll become this zen master that deals with every emotion beautifully, but just have a play, and then when you start to see some small wins, you’ll go, “Oh, this is really cool.”