How to Love Your Body Healthy (Interview with Libby Babet) 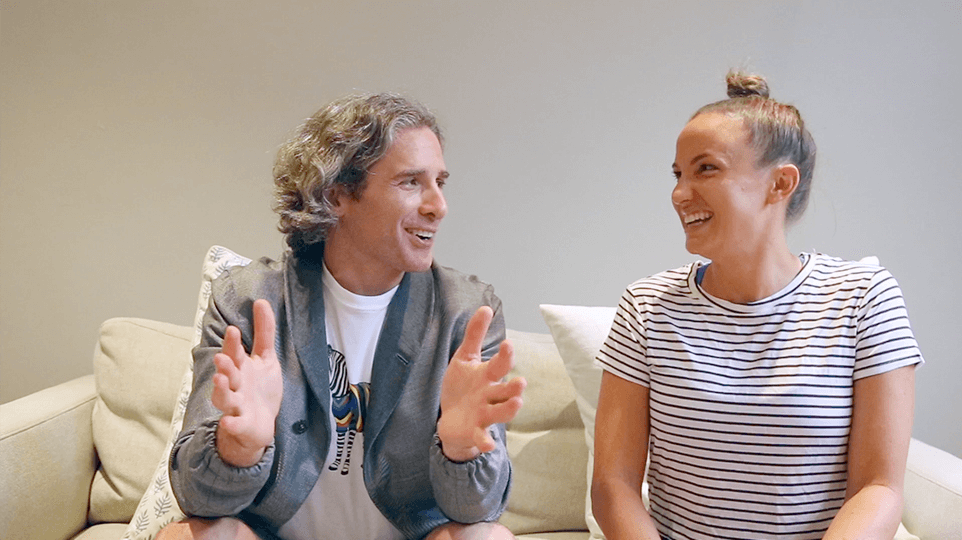 Your body-image impacts your entire life, including your eating, physical activity, and weight management.  So what is body-image and how do we improve it?

✔︎ The number one cause of body-image concerns.
✔︎ Why it’s NORMAL to have a negative body-image.
✔︎ Why body-shame is like being in “The Matrix”.
✔︎ How loving your body is a rebellious act!
✔︎ Why your negative body thoughts are NOT yours.
✔︎ Developing your own beauty standards.
✔︎ What triggers Libby’s negative body image thoughts (yes, she has them!)
✔︎ The thing that tells us that positive body image is not all about being attractive.
✔︎ How body image avoidance can make your life smaller (and how to overcome it!)
✔︎ How Libby’s husband Justin reacted to gaining weight on holidays!
✔︎ How body positivity is NOT a weight loss tool.
✔︎ How we are all different shapes and sizes – like dogs in the dog park!
✔︎ What happens when people become AUTHENTICALLY body positive.
✔︎ How knowing the difference between “body weight” & “body image” can change your life.
✔︎ How working on body image doesn’t have to be traumatic.
✔︎ Two strategies Glenn uses to improve the body image of almost every client.
✔︎ Libby changing her own social media posts after watching one of Glenn’s videos (good for health professionals!)
✔︎ How your body positivity benefits EVERYONE.
✔︎ How body positivity is closely linked with positivity towards yourself in general!

If you love this chat and feel like you need a helping hand to fully experience the benefits of becoming more body positive for yourself, we have a 6-week fully online program that will help you say goodbye to self-criticism, learn to love the skin you’re in, and help you achieve your best health from a place of LOVE.

Find out more about Love Your Body Healthy

Libby:                      Yes. And we’ve been talking about lots of different things throughout a series of videos we’ve been making on how you can become happier and healthier. And today, we are here with another one which is all about body image. Huge topic.

Libby:                      B, it’s like … I just feel like it’s become this Chinese whispers because it’s more visible on social, on the web, all this kind of stuff. Suddenly, it’s seeped into our daily lives too. But are there other reasons you think that that’s going on?

Glenn:                     Exactly. Exactly. And that’s what we actually find is that people who internalise those comparisons more tend to have worse body image.

Glenn:                     And some people can kind of brush them off a little bit and still have their own sense of what is beautiful and healthy and successful.

Glenn:                     It’s like unplugging from the body shame matrix and developing your own sense, because it might … The Matrix is probably not a bad metaphor because the matrix seems so real.

Glenn:                     And the more work you do on your body image, you’ll feel so much better in yourself that one of the side effects is you will learn how ingrained and how pervasive this diet body shaming culture is.

Libby:                      Yeah. Well, that makes a lot of sense actually because it is … Yeah, I think unplugging is actually the perfect way to say it because I never would have any doubts about the beauty of my body when I’m just there with my husband who loves me or my sisters who I have a great time with. But it’s when you are … For me, it might be I’m out at a commercial job and we’re there amidst all these other trainers, a lot of whom are younger and thinner and fitter and that going into the matrix, that comparison trap, that actually makes you second guess yourself.

Glenn:                     Yep. And you can have in the same day, you might spend the morning with your husband feeling great about your body, the afternoon with other people and comparing yourself.

Glenn:                     Yep. Yep. I think the biggest effects are psychological. It just takes up so much of your time and your effort and your energy, and it makes you … There’s something we call body image avoidance, and it means you don’t go into situations that can spike your body image anxiety.

Glenn:                     So people deciding that they’re not good enough before they even give themselves the opportunity. So it can make your life very small.

Libby:                      It’s funny. We went to Hawaii over Christmas for this beautiful … It was the most extended holiday we ever had, like three and a half weeks, myself and my husband. We had a great time. When we went at the end of that trip to go on a helicopter ride, we had to get weighed. And we hadn’t thought about anything the whole time we’d been drinking and having a good time. And we got on the scales, and I was roughly the same as at the start of the trip and Justin had put on like five or six kilos.

Glenn:                     You might avoid exercise, which is a very common thing. Sometimes if you really don’t like your body, it pushes you into extreme diets which only give you the yo-yo’ing.

Glenn:                     Or emotional eating. Absolutely. So I think that’s a really important message for people to understand, that body image issues are not going to help you create lifelong healthy habits.

Libby:                      And I think that’s really important because we see on social media sometimes these … and perhaps I know there’s all the thin stuff, but there’s also bigger people that are a part of positive body image movements and all that kind of stuff.

And you see it in people’s families. People say to me, “Glenn, all of my sisters are people who live in larger bodies, my mom, my aunties, I am. I have been all my life. So if I get body positive, I’m going to suddenly look like Libby?” And I’m going, “No. You’re going to look like the best, healthiest version of you.”

Glenn:                     But there’s so much that your body image stops you from doing. And if you let go of that, it really opens you up and takes the shackles off and allows you to live life, it helps you be more social, and then it helps your eating and your physical activity balance out. That’s why in our programme that we do with people, we call it Love Your Body Healthy.

Glenn:                     Yeah. That’s an awesome question, Lib. And I think it is really important, especially when we’re in diet culture. Diet culture sells us the idea that change should be super fast and super easy.

Glenn:                     But what it’s doing is acknowledging that it’s very hard to develop body positivity when there are so many messages bombarding us all the time.

Glenn:                     I say to my clients who are recovering from eating disorders, typically they’re younger people, and I have a conversation with their parents where I say, “If they can’t unplug from social media, I can’t work with them.”

Libby:                      Yeah. Yeah. And that’s a really, really important one. And to be completely honest about it, it’s something that I had to think about probably about a couple years ago now, because when I started out as a PT I looked at what other successful PTs were doing in the industry and that was showing workouts or giving positive health messages but in tiny clothes that showed off their amazing bodies. And so I naturally kind of did the same. It was like everything was posed but here’s a great message.

And I found that over time … I think it was actually I was listening to something you had posted about this uncluttering process, and I thought to myself, “Oh my goodness. I am probably contributing to this and not meaning to.” And so then I purposely took … I went, “That’s it. That’s enough of that for me.” Now, I’m going to show pictures of … If I’m talking about going for walks, I’m going to show me on a hike in my rugged clothes that don’t necessarily look great and I’m not going to be there showing off, because it’s not about that.

Libby:                      Yeah, it was really … But it was a hard thing to acknowledge. And you know what? It took me a long time then to get the same number of interactions on social media, but it was an important thing to do. And if you’re not interacting with people who think that it is important, that you are important enough for them to put their ego away, it’s worth thinking about like, “Sorry. Unfollow.”

I always recommend people, when they declutter and start to follow … if you just hashtag or Google body positive, size diversity, health at every size, intuitive eating, you’ll find a subculture that’s growing of people. I call them weirdos ’cause it’s normal to not like your body. I’m trying to help create a subculture of weirdos.

Libby:                      Yeah. I think that’s super important. And even for yourself, guys, if you yourself are posting or trying to post these perfect pictures, I found personally from my own experience when I stopped doing that I actually stopped comparing myself as much, ’cause all of a sudden I didn’t have to look as good as those other trainers or influencers, because I wasn’t doing what they were doing. I was just posting … I wasn’t retouching my photos. I wasn’t having to look good or doing my hair or wearing skimpy clothes. I was just doing my thing, and whoever followed and got something valuable out of that, then awesome.

Libby:                      And also it then becomes not about you but about the people you’re serving and providing value to, and I think that in itself creates a positivity about who you are.

Libby:                      Cool. Okay. Well, that was a good rundown. And as Glenn said, we did do another chat in a bit more depth purely about tactics and ways or things you can use to actually … little tricks you can use to get more body positive. So definitely check out that video. But also, I love that chat. Thank you so much, Glenn.